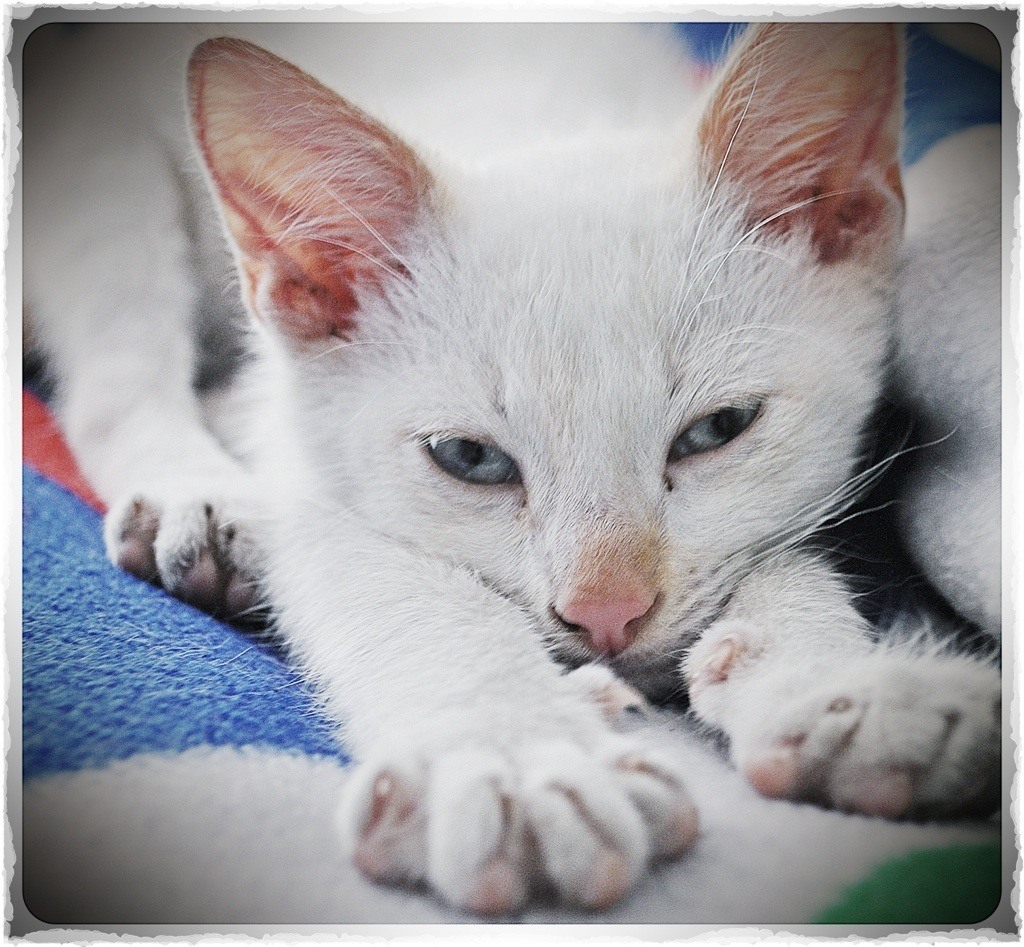 So upon being given one lost kitty which i fell madly in love with, I quickly decided that my new kitty needed a little friend to play with…so we got Blaize. I found her on Gumtree, named “Elle” – all the way out in freaking Gordons Bay! But i just got that feeling when i saw her face amoungst the multitude of kitten faces needing homes, so i missioned on out there. Practically had to wrench the little thing away from the “foster parents” who were very unimpressed that i had no cat-carrier to transport her in, and flew home like the concord with wailing new kitten in tow.

Took her for the first vaccinations, and the Austrian vet kept calling her a “He”. Now i know these foreigners often get their things mixed around so eventually i felt compelled to point out that it is a “SHE”. The vet looks at me puzzled, then goes “No no, zis iz a boy, zee here – zees are ballz! not a fanny, zees Ballz!”  Umm ok so actually i have a boy cat, good thing i didnt keep the name “Elle”. My daughter asks “Mommy is Blaize a boy’s name?” Well now it is.

We drive home from the vet, with Blaize hysterical, wailing, trying to climb all over the car (yes still no cat carrier i know). She, sorry he has just had deworming, de-fleeing, and vaccinations. The little rat gives an almighty fart and my 8yr old daughter trying desperately to hold on to it, shouts in panic “Mom I think its making a poo!!”. NOOOOOO!! Then she says “Mom there’s something coming out of its bum, it looks white?!” I’m trying to steer with one hand, trying to hold the menace still with the other, and trying to see its bum and look where i’m going all at the same time, all the while accelerating faster to get the hell home before more chaos ensues. And then it happened, this white worm crawled out of its bum and onto my gear lever!! AAAAAHHHHHHHH!!!. i almost hit a parked car! I flew through stop streets, red robots, at a 120km on the 60km suburban roads, got home, dived out car with kitten in one hand, raced inside, threw the cat out the window to the backyard and shut the window so there was no way back in. Went back to my car with some toilet paper to remove worm, which as i had got home i had noticed had wormed its way onto the handbreak. But now…it was gone! I searched everywhere & eventually had to resign…this worm is still some where in my car!

But you know i suppose its the same with having kids…you have one and they are so good, too precious, and so loving and easy to care for, so misguidedly you think to yourself, why not have another? Double the love right? But the next one comes along and its a whole different kettle of fish.

It climbs my dining room chairs with its claws like spiderman, it keeps trying to eat my food as i am eating it, it farts the most hiddeous smells constantly, and its forever standing in its own poop when doing the business, then coming into the house stinking & leaving a mess. We have regular fights over a basin of water as i try to wash it clean & it tries to kill me.

But after its licked itself dry, it will come back to find me, come lie on my chest, purring and wanting love…i will give it a little scratch and a cuddle, and it will fart and i will scream, and throw it off me in disgust.

Cats must have a short memory, because it still adores me.